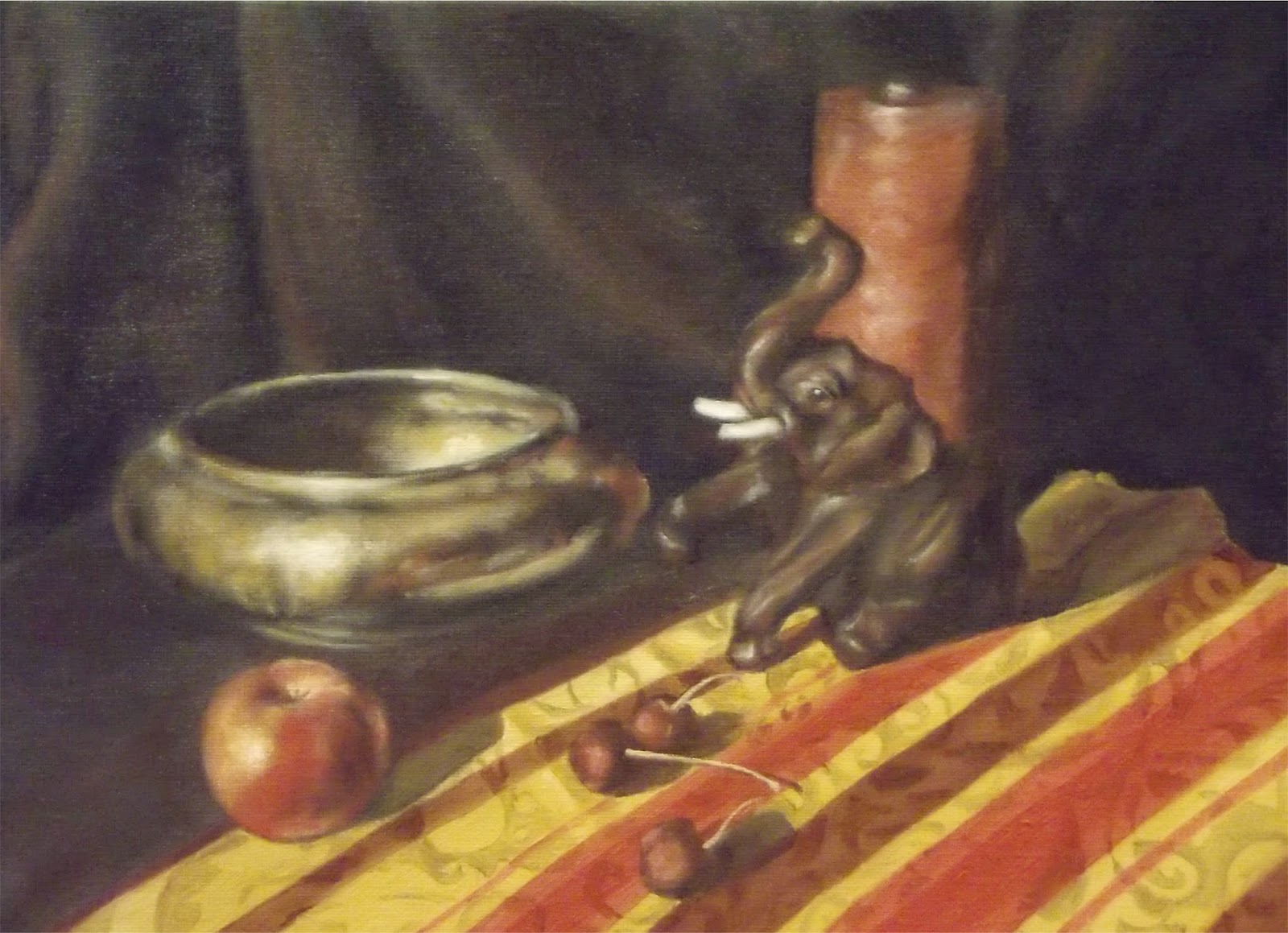 I have been excitedly preparing for February's First Friday festivities. I will have new art in at Short Term Gallery and Cabin Cowboy Designs, but I will also be one of two Featured Artists in the show "Visions and Visages", at Crossroads Carnegie Art Center. The show will be a mixture of portraits, figures, and still lifes paintings. This is my first time as featured artist outside of my own gallery, The Dancing Elephant. This painting, Leather Elephant, will be one of the paintings on display at Crossroads.

I found this leather elephant, and its mate, at an antique shop in Sumpter, Oregon. They were so unique and interesting, I just couldn't pass them up. I am not an elephant collector, not really, but my sister Cathy was. Cathy was older than me by nine years, and she collected elephants from the time she was little. She passed away a few years ago from Ewing's Sarcoma, a very rare cancer with no hope at this point for full remission. So every time I see an elephant, I think of Cathy. When you see elephants in my art, they are there as a memorial to my wonderful middle sister.

If you are in Baker City during the first Friday of February, 2015, or any time during the month of February, make sure you go by Crossroads Carnegie art center to see the show. You won't want to miss it!
Posted by Amy Sutton VanGaasbeck at 7:36 PM No comments:

This is the episode of The Dead Files where I get my 15 seconds of fame (if that, haha) as their sketch artist.
Posted by Amy Sutton VanGaasbeck at 10:44 PM No comments: 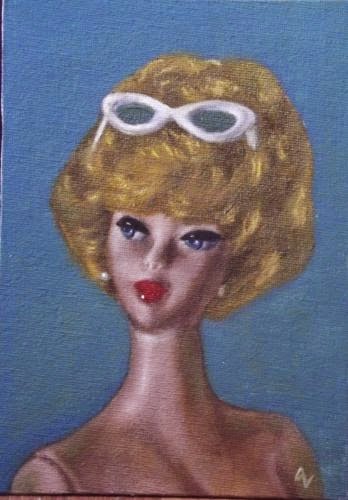 I am celebrating a big achievement in my life, that of graduating from Academy of Art University with a degree in fine art! It has been a long journey for me and I am proud of my accomplishment. The actual graduation ceremony will be late spring in SanFrancisco, California, and I am hoping to have enough money saved to participate.

This is a miniature painting I just finished in celebration, "Blonde Bubblecut". It measures only 5x7" and is painted in oil on a canvas board. It is signed on the front and signed and dated on the back.

Barbie has always been a major part of my life. I remember receiving my first brand new Barbie, "Beauty Secrets Barbie" for Christmas when I was about 4 years old, but she wasn't my first Barbie. I had my older sisters' hand me downs, which included many Barbies, Kens, Skippers, and even Allan, and I played with them all the time, along with Ideal's Tammy Family. Good memories for me, I kept all of my childhood dolls, and became an educated collector at an early age, keeping my new dolls in their boxes, and picking up older ones at yard sales and thrift shops.
This particular Barbie is one in my collection. The original model for this doll has titian red hair, and I have done a large painting of her with her original hair color, but I also wanted to experiment with changing her hair---a good exercise in improvisation. I am happy with how she turned out.

Posted by Amy Sutton VanGaasbeck at 10:29 PM No comments: