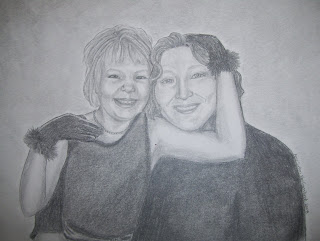 This was a commissioned portrait in pencil that I did for a friend of mine, Monte Loyd, who had it made for his wife Janelle for Christmas 2007. It is based upon a photo of Janelle and their daughter, Blaecleah. I was very pleased with the way it turned out.
Posted by Amy Sutton VanGaasbeck at 10:47 PM 2 comments: 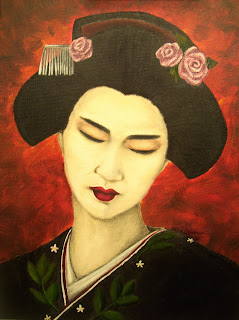 My sister Kelly bought me Memoirs of a Geisha a few years ago, which sparked my interest in Geisha. I then read other Geisha books by Mineko Iwasaki and Liza Dalby and I just had to make a painting of a Geisha, so here she is. I am not good at flowers and might try working on them a little more after they are dry. Except for the flowers, I think I am happy with this piece.
Geisha, 2009, oil on canvasboard, 12"x 16"
Posted by Amy Sutton VanGaasbeck at 10:42 PM 2 comments: 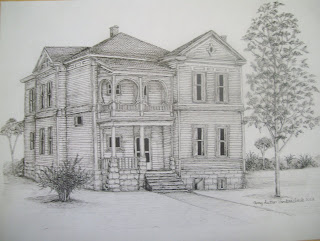 I love drawing Victorian buildings. This was done during summer of 2008, and is a house here in Baker City which is now turned into apartments. This is one of my favorite houses to drool over here.
Baker City is full of gorgeous houses and buildings from the 1800's and early 1900's. It is a beautiful town with a rich history.
I would like to make some kind of tour book of all the old homes of Baker City with my drawings as the pictures. I need to do some research on the homes as well. It is a large undertaking, who knows how long it will be before I accomplish this? It might be a lifelong work, but will be fun.
I entered this piece in the 2008 Baker County Fair, and it won First Place, and also Best of Show.
Victorian House (until I know the name of the building), 2008, Pen and Ink
Posted by Amy Sutton VanGaasbeck at 9:10 PM 2 comments: 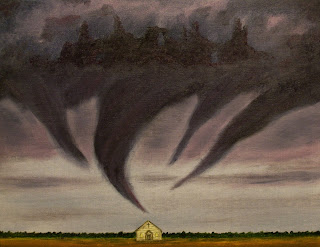 A few months back I had a dream. In it, my two daughters and I were in a church. I looked out one window and saw a tornado approaching but it was still quite a way off. I looked out another window and a tornado was just right there. I got my girls and we hid under a pew and I told them to pray, everyone in the church was hiding and praying. The tornado blew wind through the windows and doors, and blew stuff around, papers were flying everywhere and it made a mess, but no real harm was done. After the wind stopped blowing, I took my girls and got in the car, and I looked back at the church, and I saw storm clouds directly above the church. They were very dark and menacing, and in the clouds there was a dark cloudlike form that looked like a castle or kingdom. From the bottom of the cloud there formed funnel clouds, all pointed toward and hovering over the church. They looked like they were just waiting there, they were not touching the church and I got the feeling that they could NOT touch it, either because people were praying inside or simply because God would not allow it.
I don't have all the answers as to what this dream may mean, but when looking at the dark kingdom, I heard the word "counterfeit". I took this to mean that like in Revelation, the New Jerusalem descends from Heaven, Satan has a counterfeit kingdom that he will try to set up, possibly upon the church or to destroy the church. He will not be able to destroy the true church, however as the prayers of the saints and God's protection will cause it to survive. He may be able to blow things around inside, but as long as the church remains in prayer, calling out to God, he cannot touch it and no obliteration will come.
This dream really made an impression in my mind, and I felt like it should be the next thing that I paint, so that is what I did . This is one evening's work.
Storm Warning, oil, 11"x14" canvas board
Posted by Amy Sutton VanGaasbeck at 6:17 PM No comments: 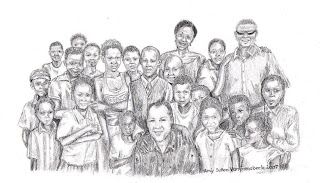 Here is a pencil sketch I created for my friend Monte Loyd, based on a photograph of him in Botswana , Africa. He's the white guy in the center, bottom row. He was given the honor of speaking (with a translator) at a small church I believe near Gaborone, and these were some of the children and young people who attended.
I made this for his birthday the year that he traveled to Africa.
Thanks, Monte, for the use of your photography.
Posted by Amy Sutton VanGaasbeck at 6:11 PM No comments: 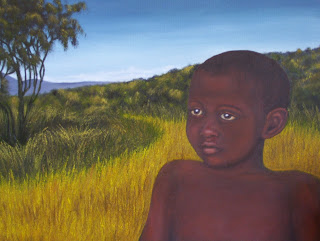 I just finished this oil painting based upon photographs by Monte Loyd. I started this one over a year ago and things just got so busy I put it aside. It has been calling out to me for a long time, and so I got it out last week and put the finishing touches on it.
The background is from a South African game reserve, and the little boy was from Botswana, playing near his mother who was selling her wares on the street.
As you can see from my artwork, my heart's desire is to go to Africa and to make a positive impact somehow with my art.
African Boy, oil on stretched canvas, 16" x 20"
Posted by Amy Sutton VanGaasbeck at 6:02 PM No comments: 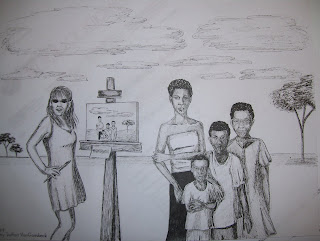 I am always looking for scholarships or ways to fund my college education because I do not want any debt if at all possible. I created this pen and ink sketch for the Church Hill Classics 2009 "Frame Your Future" contest.
In this frame of my future I am in Africa, painting portraits and other subjects that I find there. I would like to sell my art and use the proceeds not only to take care of my family, but also to help out those in need all over the world.
My entry didn't make the cut to win the prize, but that is okay. It was fun doing it. :)
Posted by Amy Sutton VanGaasbeck at 5:51 PM No comments: 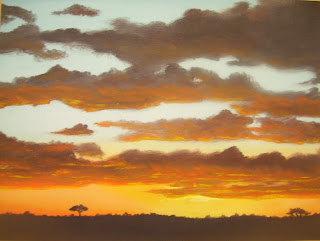 This oil painting was done last summer in one day, and is based on a photograph that my friend, Monte Loyd, took while on a trip in South Africa.
I would love to travel to Africa some day, this is actually one of my goals, to spend a few weeks or a few months there, taking photographs and creating art based on what I see there.
This is my favorite of my own paintings.
I entered this painting in the 2008 Baker County Fair and it won first place.
I wish all my paintings happened as effortlessly as this one did!
"South African Sunset" , oil on canvas board 11"x14"
Posted by Amy Sutton VanGaasbeck at 5:37 PM 1 comment:

Welcome to my blog 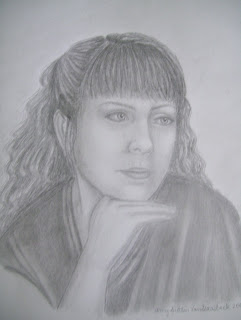 Hello, and welcome to my blog, where I will document my adventures in art.
My name is Amy, I am married and have three kids, Matthew, Elizabeth and Emily. I live in a small town in Eastern Oregon, where I have lived all my life, and I love it here. I am in my mid-30's and on September 3, 2009, I will begin a new adventure, as I go to college for the first time, and I will be working toward a degree in fine art. I am very excited, as I have wanted to go to art school since I was in high school, and now I finally have that opportunity. I have never had any formal training, and know that there is much to learn that I do not even have a clue how to do. I am looking forward to being challenged and stretched.
I hope to become a high-quality artist, and have my work hanging in whatever galleries will take me. I would like to try my hand at children's book illustration eventually as well. I would also like to travel the world and paint and draw what I experience. Wouldn't that be a blast?
In these endeavors, not only do I want to provide for my family and find personal fulfillment, but I want to enrich my community and ministries that I support.
So, I hope you find my blog at least somewhat interesting. I would love to know what you all think. Thanks for taking the time to check out my blog.
Posted by Amy Sutton VanGaasbeck at 4:48 PM 2 comments: