I  first learned about Lorenzo Ghiberti in an art history class I took in college, and I wrote a paper about the doors he created, The Gates of Paradise, and how they compared to Bernward's Bronze Doors of St. Michael's.

Lorenzo Ghiberti was a shining star of the Early Italian Renaissance, best known for the aforementioned bronze doors of the Florence Baptistery. He was trained as a goldsmith and sculptor, and wrote Commentari, what may be the earliest autobiography of an artist.

Ghiberi was born in 1378 In Pelago, near Florence. His father was Bartoluccio Ghiberti, a goldsmith, who taught his son the trade. Later, he worked for Bartoluccio de Michele, where the famous artist Brunelleschi also trained.

In 1400, the Black Plague struck Florence, and to escape, Ghiberti moved to Rimini, where he helped complete frescoes in the castle of Carlo I Malatesta. 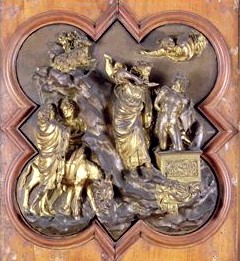 The Sacrifice of Isaac


Most of Ghiberti's career was spent working on commissions for the Florence Baptistery. As a 23 year old, Ghiberti won a competition for the first set of bronze doors, intended to depict scenes from the Old Testament. Many artists competed for this commission, and a jury selected seven semifinalists, including Ghiberti, Filippo Brunelleschi, Donatello, and Jacopo della Quercia. At the time of judging, only Ghiberti and Brunelleschi were finalists; the judges could not decide on one or the other, so they were assigned to work together on the doors. Brunelleschi's pride got in the way, and he went to Rome to study architecture, leaving Ghiberti to work on the doors by himself. Ghiberti's autobiography, however, claimed that he had won, "without a single dissenting voice."

The original designs of The Sacrifice of Isaac by Ghiberti and Brunelleschi are on display in the museum of the Bargello in Florence. Ghiberti's winning piece depicted the sacrifice of Isaac, but after he received the commission, the plan changed to show scenes from the New Testament instead.

To carry out this commission, Ghiberti set up a large workshop in which many famous artist both trained and worked. When his first set of twenty-eight panels was complete, the church commissioned Ghiberti to create a second set for another doorway in the church, this time with scenes from the Old Testament, as originally intended for his first set. This set of doors displayed ten rectangular scenes in a completely different style. They were more naturalistic, with perspective and  greater idealization. These doors Michelangelo called  the "Gates of Paradise." 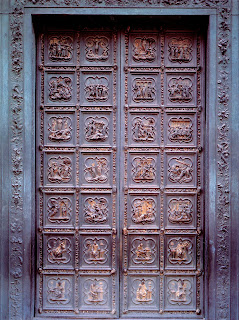 Ghiberti finally finished these doors after 21 years of work. These gilded bronze doors consist of twenty-eight panels, with twenty panels depicting the life of Christ. The eight lower panels show the four evangelists and the Church Fathers: Saint Ambrose, Saint Jerome, Saint Gregory and Saint Augustine. The panels are surrounded by a framework of foliage in the door case and gilded busts of prophets and sibyls at the intersections of the panels. Originally they were installed on the east side, but later, they were moved to the north side. 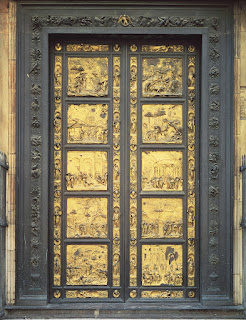 These doors skyrocketed Ghiberti to fame, and he received many commissions. In 1425, he received a second commission for the east doors. He and his assistants worked 27 years on these doors. These had ten panels depicting scenes from the Old Testament. Ghiberti employed the recently discovered principles of perspective to give depth to his compositions. Each panel depicts more than one episode.  The panels are included in a richly decorated gilt framework of foliage and fruit, many statuettes of prophets and 24 busts. The two central busts are portraits of the artist and of his father, Bartolomeo Ghiberti. 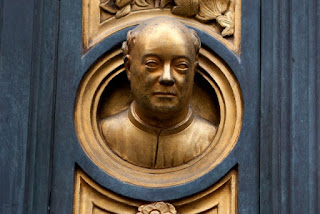 Ghiberti was also commissioned to create  gilded bronze statues to be placed within select niches of the Orsanmichele in Florence. 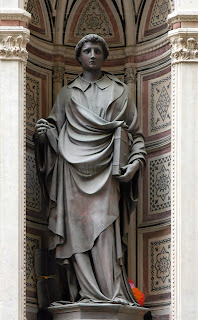 Besides his perseverance in sculpting and casting epic works, Ghiberti made time to collect classical artifacts, and was a historian and a humanist. His "Commentarii" discusses art development from the time of Cimabue through his own art, and gives us thoughts on his own art and times, from his own perspective.

Ghiberti died in Florence on December 1, 1455, at the age of 77. He left us masterpieces that still speak to us today.

Posted by Amy Sutton VanGaasbeck at 10:00 AM