September 08, 2017
There have been many theories as to the identity of Mona Lisa, the portrait painted by Leonardo Davinci. Some think it is a feminized self portrait. Some say it's DaVinci's lover.

She goes on to explain: "The woman is wearing heavy mournful garments (Isabella's mother died a year prior to the painting of the portrait--she would have still been in mourning). Visible on the bodice of the dress are the connected rings of the house of Sforza as well as knots and strings representing the connection between the dynasties of Visconti and Sforza (all the symbols of the family that Isabella had married into). ....The symbols place Mona Lisa in a category of only eight women of the time....Leonardo was a painter at Isabella's court for 11 years, and the two remained friends...for most of her life."

This is the portrait of Isabella of Aragon, painted by Bernardino Luini: 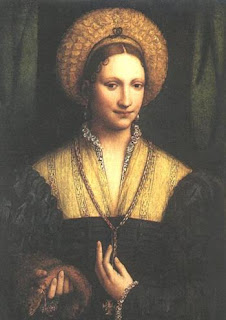 And this is the Mona Lisa, by Leonardo DaVinci: 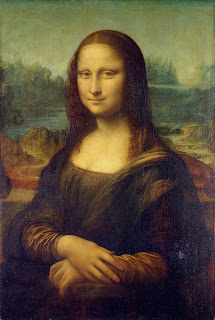 Even from a viewpoint where one doesn't notice the symbolism in the clothing, or know the time periods or history, even, just look at the similarity in the faces, the hairline, the nose, mouth and chin, and even their hands have a similar look.

I think it makes a very convincing argument as to her identity, and a reasonable one, at that. What do you think?
art art history Bernardino Luini hand history Isabella of Aragon Leonardo da Vinci Mona Lisa Oil painting portrait Renaissance

The Caves at Lascaux in southwestern France, are famous the world over for the paintings on their walls. These are some of the earliest paintings found, and are dated around 15,000-17,000 BC, and were discovered by a group of teenagers in 1940. Like the Chauvet Cave Paintings, the Caves at Lascaux were protected for thousands of years by a landslide which sealed off all access. The caves were open to the public in 1948.By 1955, some of the cave's art began to deteriorate due to all the visitors and the change in the cave's climate. Lichens and crystals and fungus appeared, which were not present before. As a result, the caves were closed in 1963, with access granted only to a few scientists. Still today, only a few scientists are permitted, and the scientific community is working to preserve and restore the paintings. In 1983, an exact replica of the Great Hall of the Bulls and the Painted Gallery, created under Monique Peytral, was opened a short distance from t
Read more 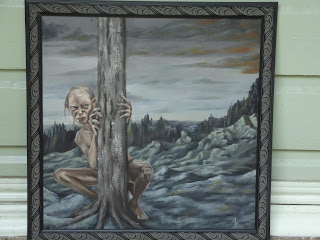 One of the things I enjoy painting is known as "altered art" what that means is that I find an unwanted painting at a yard sale or second hand shop, and I alter it, adding in an element of pop culture, normally. Usually I only alter part of it, and try to keep the additions looking like they are part of the original piece. Sometimes, if the painting was really amateur, I will enhance it a little, before adding another element.  For this particular piece, however, it started out as altered art and just became an original painting. I started on a thrift store painting that was never finished. It was a tree with the outline of a child peeking out from behind it. It was just barely sketched in, with a little green painted in the background.  Some pieces just tell me what they need to be, and this one rasped, "Gollum! Gollum!" So I researched, and ended up using three different reference photos of Gollum and Andy Serkis, to draw out my Smiegol. I am not the greatest lan
Read more 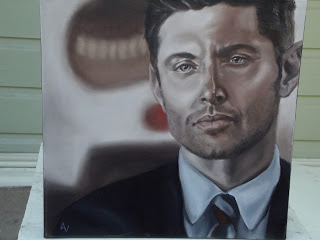 As a portrait artist, it's challenging to find a way to demonstrate to the public my ability to create an accurate likeness, using private commissions and studies, because, well, nobody knows who these people are unless they are friends or family. They may be done well, may be a perfect likeness, but if you don't know them, you are not going to know if it truly captures their essence. This is one reason why I have created celebrity portraits. The majority of people can recognize them. Even if a portrait is done poorly, you can still get a likeness; but if you are really good at what you do, people will see and appreciate that. Right now, we are looking at the end of a 15 year television series being filmed this week. I am speaking of Supernatural. If you don't know what it is, it's about two attractive brothers, Sam and Dean, who are "hunters". They track down ghosts, vampires, werewolves, demons, and other things, with the help of their angel buddy Castiel.
Read more